When one thinks of Indiana, cornfields and basketball may come to mind. But turquoise waters lapping tawny sands? Only those who have discovered Indiana Dunes National Lakeshore and the adjacent State Park would think of that.

This place has long been on our list. Last weekend, I started considering a camping trip and checked out weather.com. Rain, rain and more rain – except for the very northwest segment of the circle formed by the four hour driving radius that I consider possible as a weekend trip. This area was supposed to get bad storms on Friday night, but the storms would bring in cooler temps and dryer air. This seemed like our best chance for a camping trip.

There are two campgrounds in the Indiana Dunes area. The Dunewood campground is managed by the National Park Service, but its 78 sites are available on a first-come-first-served basis. It is my understanding this often means no vacancies by early Friday evening on popular weekends. The State Park also has a 140-site campground. Reservations may be made in advance at reserveamerica.com, but fill up early. There were no sites available a week in advance, but with frequent checking, we found a cancellation by Monday morning. We watched the weather all week and the front with associated storms swung from early Friday to middle of Saturday. There was no doubt it would be wet. Hopefully it would mostly be early rain and not much humidity.

When we neared the Chicago outskirts the skies darkened. Lightening shattered the sky in displays that would have been exhilarating if we were planning to sleep indoors. But as we got closer, we realized we would be flirting with more than getting soaked. The weather was dangerous.

The storm was slightly less intense when we arrived at the campground, but there was a relentless rain. It was also well past dark. We were shocked to find both the main state park and campground booths staffed after 10:00pm. We found our campsite, dug out our raincoats and began setting up the tent. Unfortunately, our normal efficiency was disrupted by our desire to try to keep things as dry as possible in the steady downpour. Ironically, our sense of urgency made everything take twice as long. When the tent was finally up and we were safely inside, we were disheartened to find that the storm had not brought cooler air. The air in the tent was steamy and my forearms were sweating just lying still.

In a stroke of brilliance, I opened the tent doors to try to allow for a bit of ventilation. I asserted bugs could not fly in the downpour. I continued to deny the physics of insects even as I began to feel tiny bites on my elbows and feet. When I finally turned on my headlamp, I was horrified to find a swarm of mosquitos. These were not normal bugs, but Hunger-Games-esque mutants in quantities I have literally never seen before. “I think I may be ready to call it,” I admitted. Before I could get the words out, Ted was in the car and ready to do.

Twenty minutes later, we were checking into a Comfort Inn. It was only the second time in my entire camping history I had ever given up on a night in a tent. But as I spent 30 minutes in the tent the next morning killing mosquitos (I counted 40) I consider it money well spent. Right now, I can count more than a dozen mosquito bites on my left foot that I acquired in fewer than 5 minutes.

Despite the late night, we resolved to wake early and make the most of the day. We started at the Visitor Center. Extremely friendly rangers helped orient us to the mix of state, national and private attractions in the area. We learned of a ranger-led bird walk at the Great Marsh Trail System that seemed perfect. The tropical air did not deter a great group of beginning birders. We struggled to identify some little brown birds, but were treated to a fantastic show by a Red Tailed Hawk. 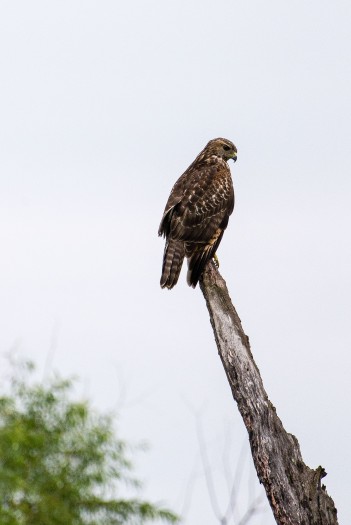 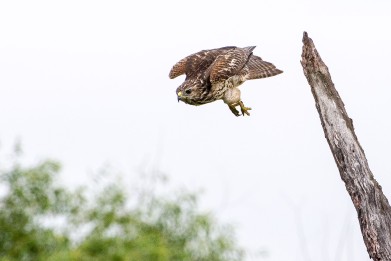 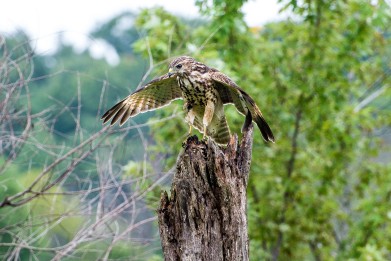 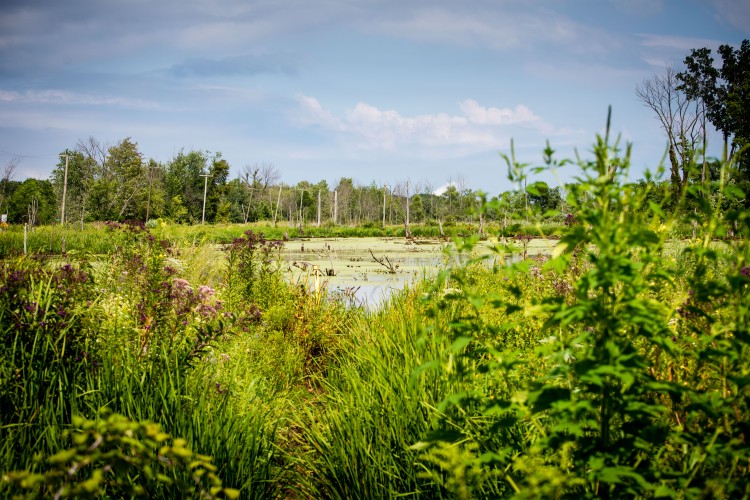 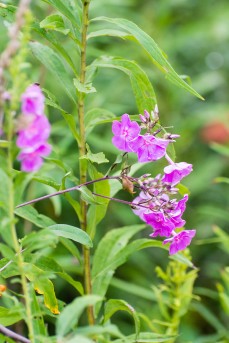 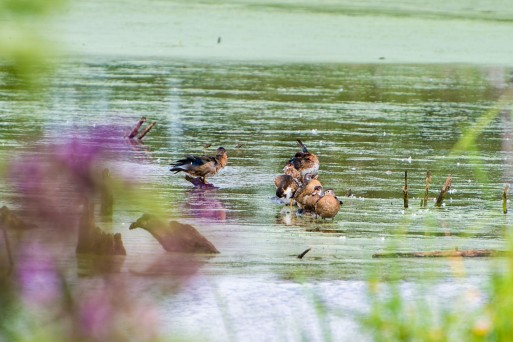 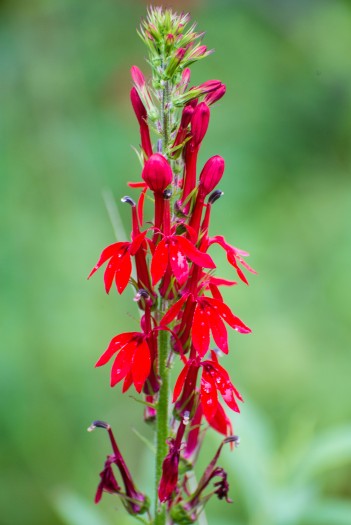 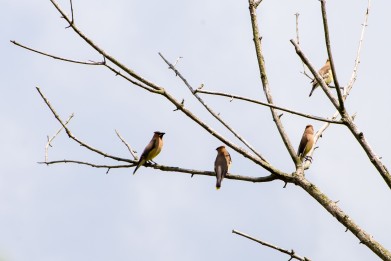 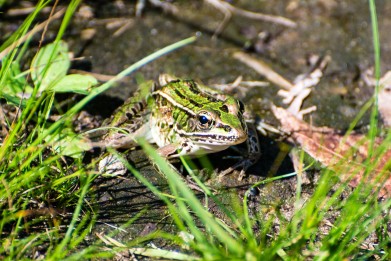 While on the hike, we learned that Pinhook Bog was scheduled to be open that afternoon, a relative rare opportunity to hike on a glacial kettle. So we drove the 30 or so minutes through Michigan City. The Pinhook Bog hike is only a mile round trip and half of it is rather unremarkable. But the termination is the opportunity to literally walk on water. By my rather weak understanding of geology, 15,000 years ago the retreating glaciers left a melting chunk of ice in an impermeable clay soil basin. Over time, a 5-foot crust of moss and other plant life has developed on top of 40 feet of water, creating the impression of a forest from a distance. But the reality is a fragile ecosystem than can only support the hardiest of life. 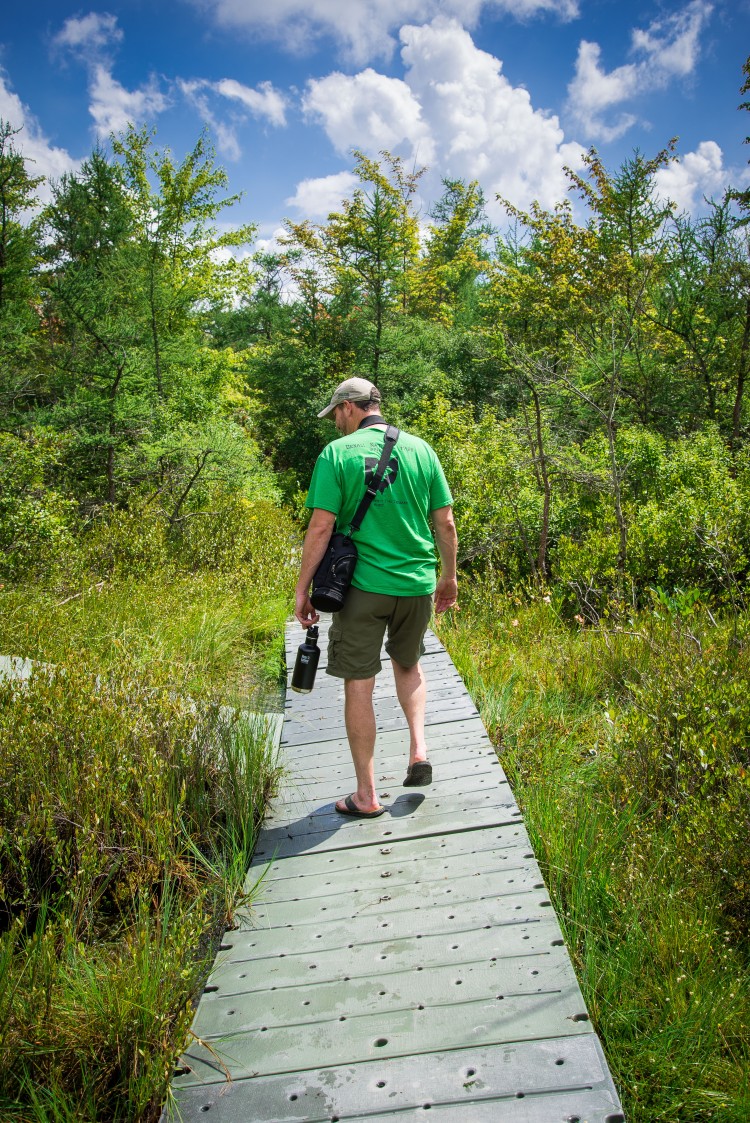 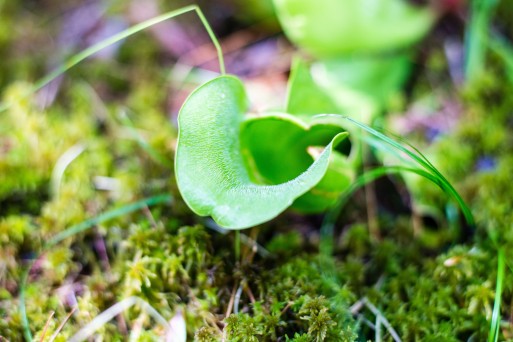 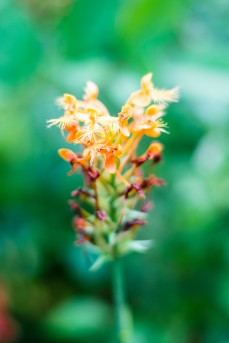 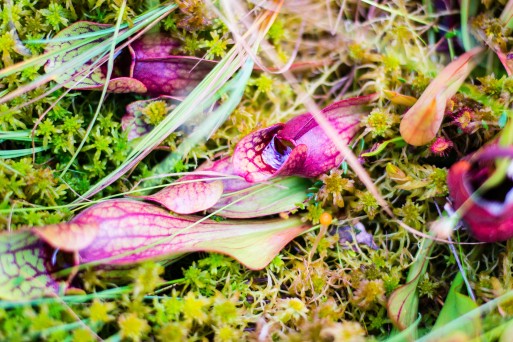 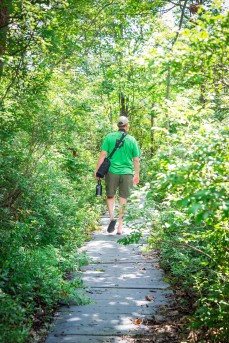 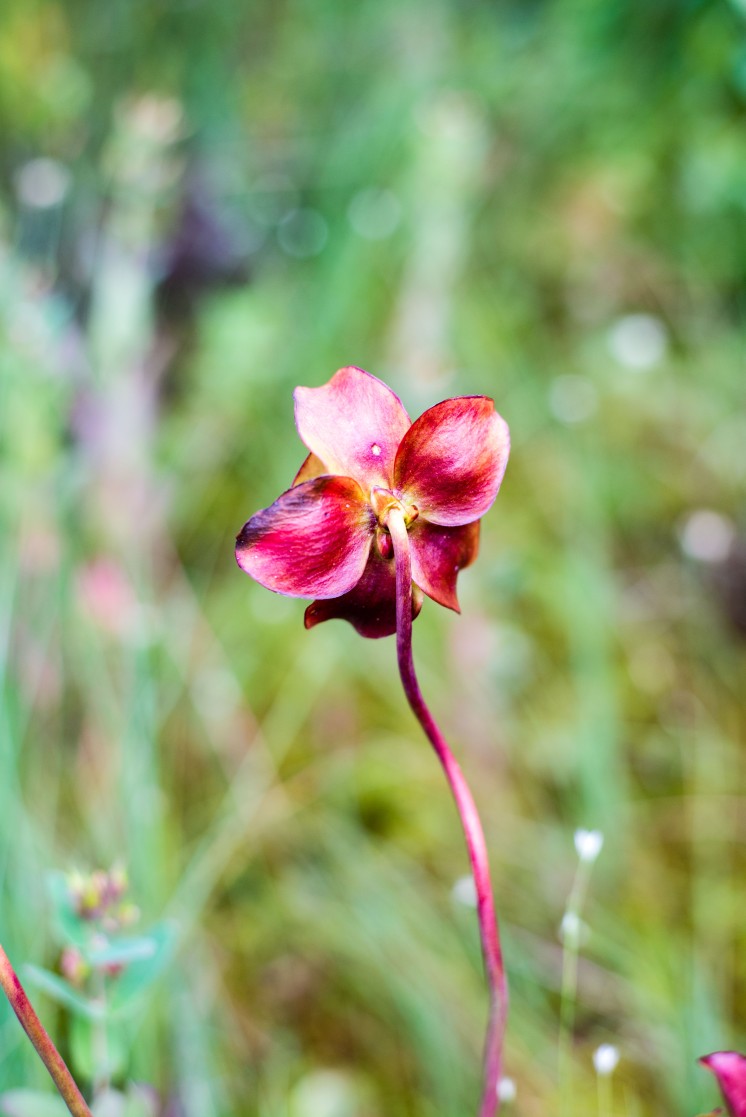 Our beach time on this trip was limited, but we were extremely impressed by the quality of the beaches. If sitting in the sand is appealing to you, this is not a bad option at all. The sand was soft and the water was cool. A steady, refreshing breeze came off the lake. There did appear to be a strong rip current off the beach and we were witness to an emergency rescue in the evening, so I must urge caution that this can be a dangerous beach. 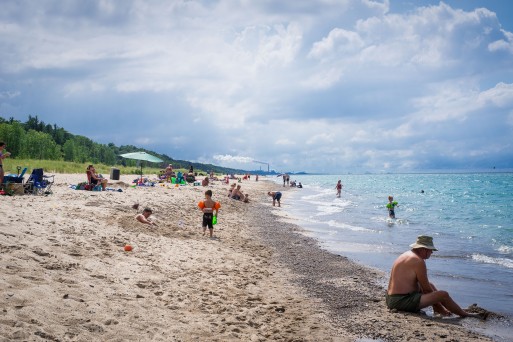 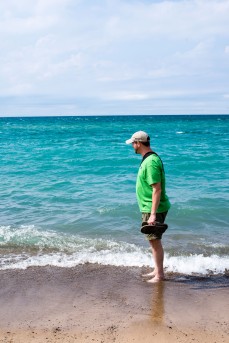 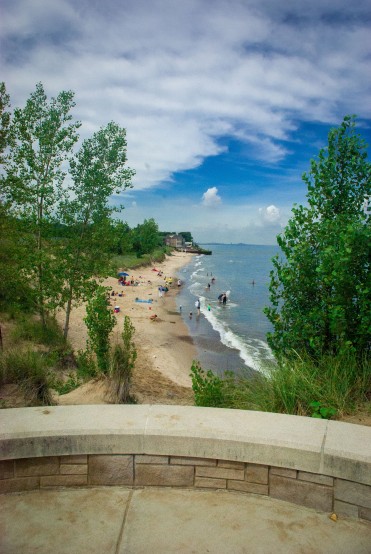 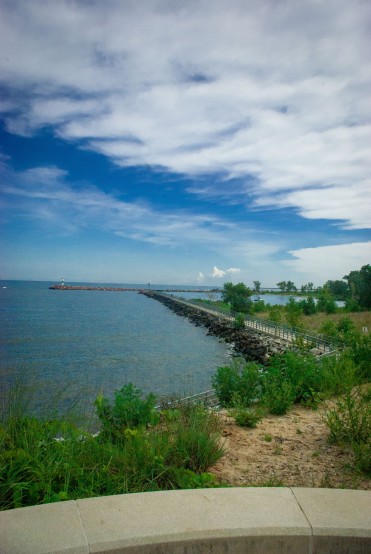 We enjoyed dinner in the nearby town of Chesterton. The Octave Grill had delicious burgers and beers. And Chesterton transcended the typical dilapidated small town image. It seemed to be one of those unicorn places that actually thrived and yet maintained a healthy, quirky culture. 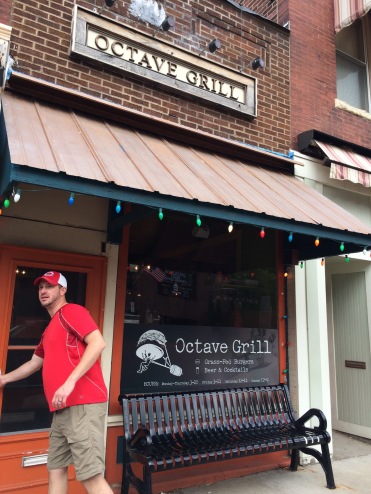 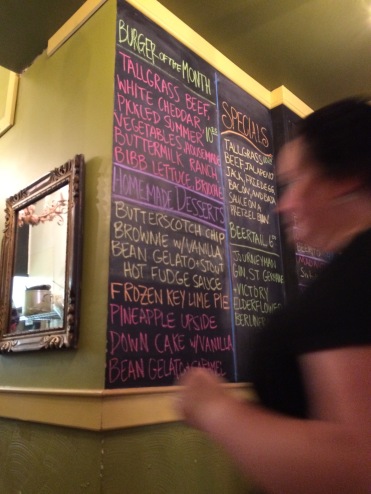 We were lucky to time our visit to the dunes during the Perseid meteor shower. To mark the occasion, the park held an evening program on the beach. At 9:00pm there was a talk on constellations. The beach remained open all night for meteor viewing and sleeping. Unfortunately, the waxing moon washed out any shooting stars and then the clouds rolled in. Next time we will bring our air pads and prepare to spend the entire night on the sand. 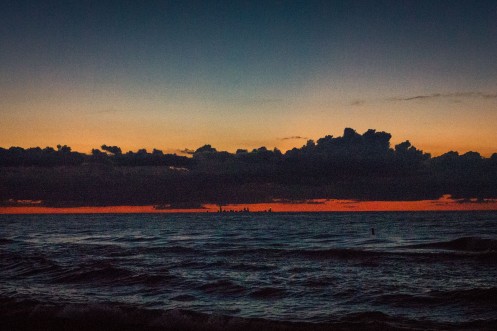 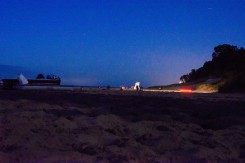 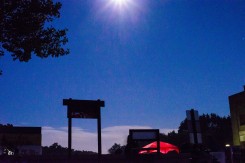 Overall, we loved our trip to the “Duneland” as it is called, but we were very disappointed in the campground, bordering on miserable. On the plus side, there are two bathhouses in the campground with flush toilets and showers. But this is definitely a trailer/RV campground and I cannot recommend it for tents. There are no tent pads or shading trees in the park. We pitched our tent in sandy grass. And while I know there is no way to determine who may be camping next to you in any campground, there is definitely a group/party camping vibe in the state park campground. Multiple groups played music well into the night. 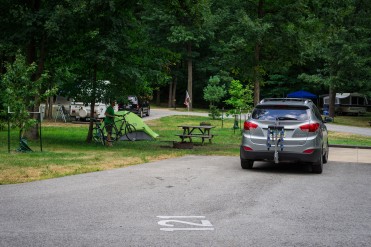 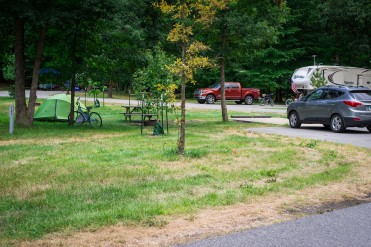 We drove through the Dunewood Campground and it seemed MUCH better set up to accommodate tenters. I believe when we come back we will gamble to get a site there and stay in a hotel if need be.It is also worth noting that alcohol is not permitted at either campground. I was able to get away with pouring a couple beers into a tumbler at our site, but I have read of people having coolers and tents searched. Just something to be aware of.

One thought on “Indiana Dunes”

I had been hearing Great Horned Owls all night every night in this campground and even got to see one swoop around at dusk. But I was thrilled when another resident let me know where the roost is. I never would imagine to look in the middle of a palm tree!
I am not normally one to chase birds. But when I happen to be in the same spot as a first ever ABA sighting, I feel like I should go pick it up. So my ABA life list now has a Bat Falcon! As with most things in birding, half the fun was the community of fellow birders. Thanks to all who helped me find this fella today and good luck to all those looking tomorrow!
Loading Comments...
%d bloggers like this: