We had to find some way to celebrate Less’s first birthday, but when we got the chance to attend Opening Day on Friday night, our outing was shortened to one night. No matter! It is just a chance to explore some options closer to home. We pass the signs for Big Bone Lick (and giggle) on anytime we head south and Ted visited frequently as a kid, but we haven’t had a chance to explore recently.

The campground is relatively small at 62 sites, but they have 30 Amp electric. Water is available every other site, so many will require at least a 100ft water hose.

We were at site 32 and really enjoyed our large lawn, but it may have been one of the least level sites we have ever stayed on. It required quite a bit of ingenuity and nearly all of our leveling aides to get close to flat. 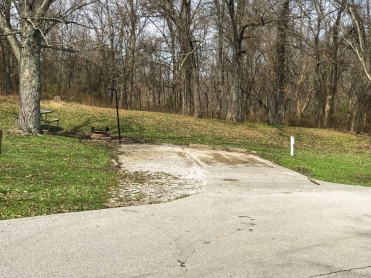 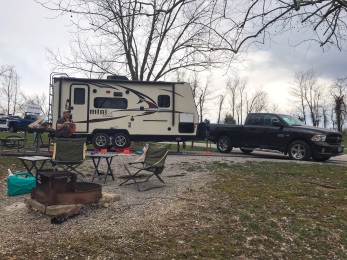 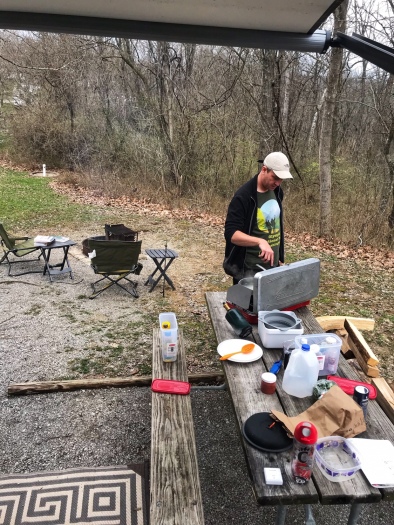 For so early in the season, the campground was pretty full. It could be the Easter weekend, but we were still pretty surprised to have so many neighbors.

The campground features normal amenities (a small pool, bath houses, a mini golf) as well as a couple historic sites of interest including a family cemetery. Firewood was $5 a bundle and of decent quality. The bathrooms were okay, but not recently updated.

We preferred the sites in the furthest loop, but could see the charms of being closer to the playground. About the only sites I would strongly suggest against are 58 and 59. A large ugly shed backs up to those sites so it is not exactly a great view.

I would also strongly suggest bringing drinking water. We aren’t very paranoid about campground water and we have probably filled up from more than our fair share iffy spigots. But we draw the line at brown water. It smelled fine and I presume it is just discoloration from the minerals the region is famous for, but it sure wasn’t appetizing.

Our favorite feature of the campground were the two trailheads that left from the field behind site 23. 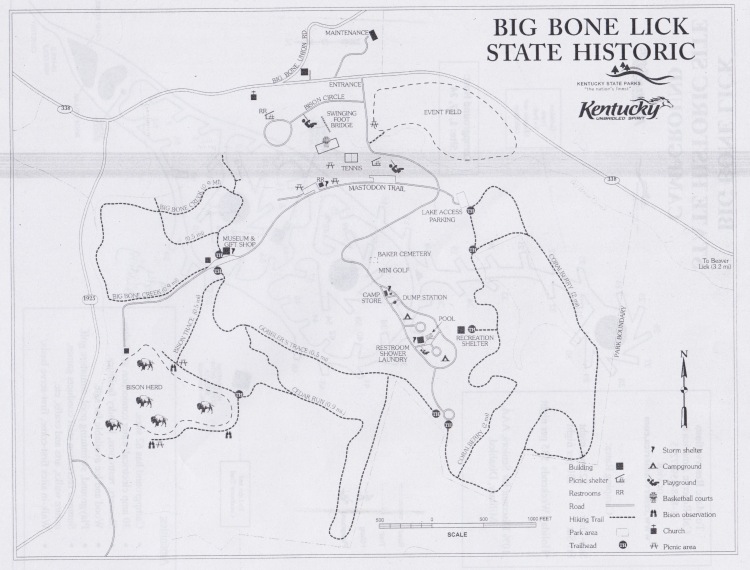 We decided to check out the famous Big Bone Lick bison so headed out the Gobbler’s Trace. 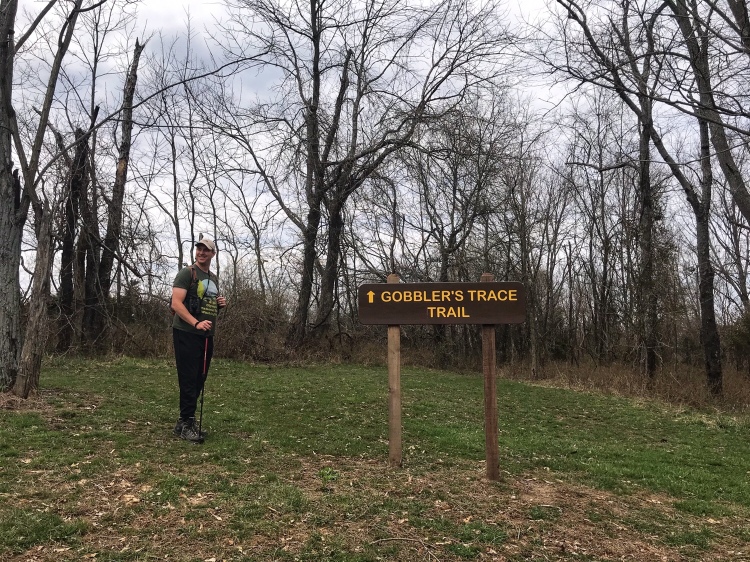 I am no cartographer, but I would say the official map is not to scale and the mileages may be approximate. The intersection with Cedar Run was almost immediate. We then enjoyed a few ups and downs along a field and down the hillside. The trees were still bare enough to catch a glimpse of the opposing ridge.

It was a true taste of spring – plenty of birds, bugs, mud, and wildflowers. 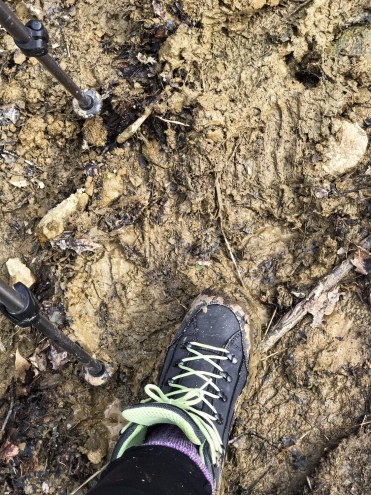 I think it might have been a bit more than a mile to the bison, but it was a fairly easy hike aside from the mud. We finally reached the bison enclosure. We could see the herd in the distance and it took us a minute to figure out which direction to walk to get closer. I would suggest veering to the left as that took us nearest to the rear pasture. When we first approached, the bison grazed in the distance. But some internal bison clock alerted the herd it was time to head to the gate near us and we soon got some nice, up-close views, even if it was through a few fences.

The map marks the distance to the museum as a half mile, but it was certainly a quick half mile. Nearly as soon as we started up the Bison Trace we came out into the parking lot. We made it to the gift shop minutes before closing to grab a quick snack and then perused the exhibits. The museum is small, but efficient in telling the story of Big Bone Lick.

And here is where I summarize my understanding of the history of the site. The key feature is the mineral-rich springs that surface here. For eons animals have been attracted to the springs to satisfy their craving for salt. But in prehistoric times the emerging waters created a literal quagmire, trapping the megafauna (big animals) they lured. So when humans came on the scene, they not only found springs from which they could crystallize much needed salt, but the massive skeletons of long extinct mastodons, mammoths, and giant ground sloths. Hence, Big Bone (salt) Lick. Lewis and Clark paused here to unearth bones to be sent back to Jefferson. It is said to be the home of modern paleontology.

As a side note, the site also features in one of my favorite historic novels. Follow the River, tells the supposedly-true tale of Mary Ingles who was taken by the Shawnee from West Virginia. She escapes after visiting the Lick and undertakes a thousand mile journey up the Ohio River in an attempt to get back home. It is a fascinating story, especially as one recognizes local landmarks.

Our trail climbed another half mile up the hill back to the campground. It was a great afternoon. Big Bone may not be our favorite local park, but it is definitely worth more than just an overnight visit.