There are times in life when you are watching a documentary on the Rocky Mountains and you decide you absolutely have to visit. So you pull out your calendars and begin to discuss when might be the best time to take a couple weeks off and head out with the trailer and the dog.

And sometimes, when you are doing this, you realize the absolute best time is now; despite a freshly-spayed dog, despite a few personal and work obligations, despite a trailer that is waiting on parts for both warranty work and Memorial Day body damage, despite having no itinerary and no reservations, and despite being rear-ended in a hit-and-run while parked. So you start packing everything you can think of and 96 hours later, you are on the road, heading west! (Thanks in no small part to the help of great friends, family, co-workers and neighbors!)

Our departure was delayed by the amount of work that needed to be done to leave for such a length of time, but we managed to pull out of the driveway by about 2:30. Our goal was to reach St. Louis. We called ahead for an RV park that seemed reasonably close to I-70.

Sundermeier RV Park is actually located off SR-370 in the suburb of St. Charles. It is certainly not the most picturesque of areas, but it is more than adequate for a quick overnight or as a base camp to explore St. Louis. The campground is extremely clean, with large, doublewide concrete pads for parking. We were in a back-in spot, but there were many pull-throughs and plenty of space for big rigs. A total of 106 site are available and all are full hookup. It is underneath the highway and in the flight path of the airport, but the noise didn’t break through our fatigue. 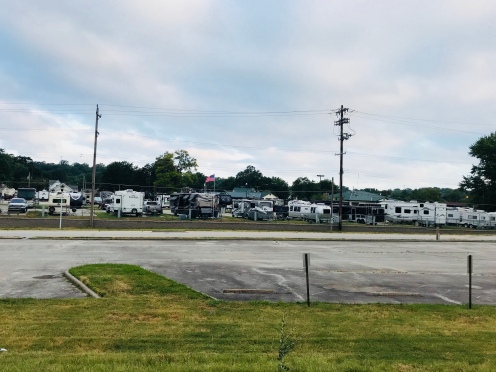 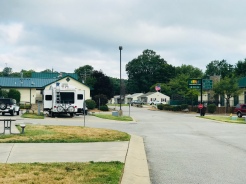 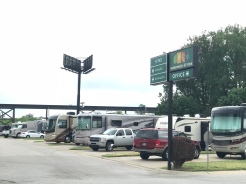 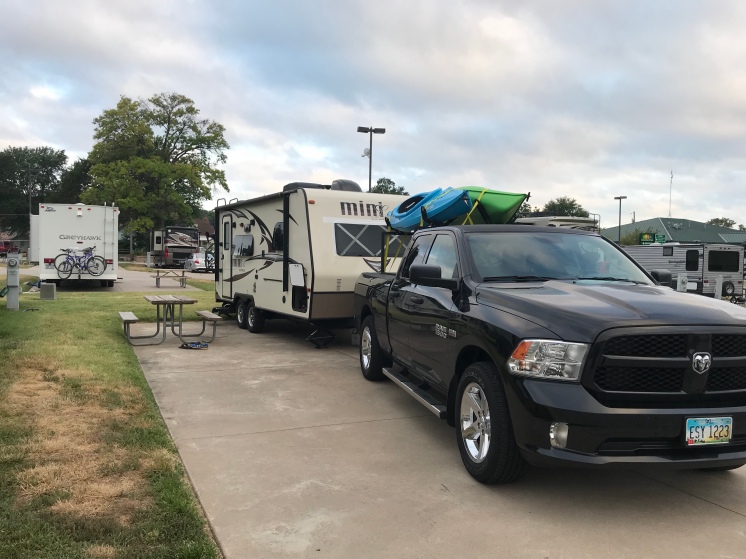 It was completely serendipitous to notice that the campground was adjacent to a walking trail that leads to a nearby park – with dog park! We made a visit to run Blue before we even checked in and stayed until dusk. It was just what we needed to wear Blue out enough to sleep for the majority of the night. 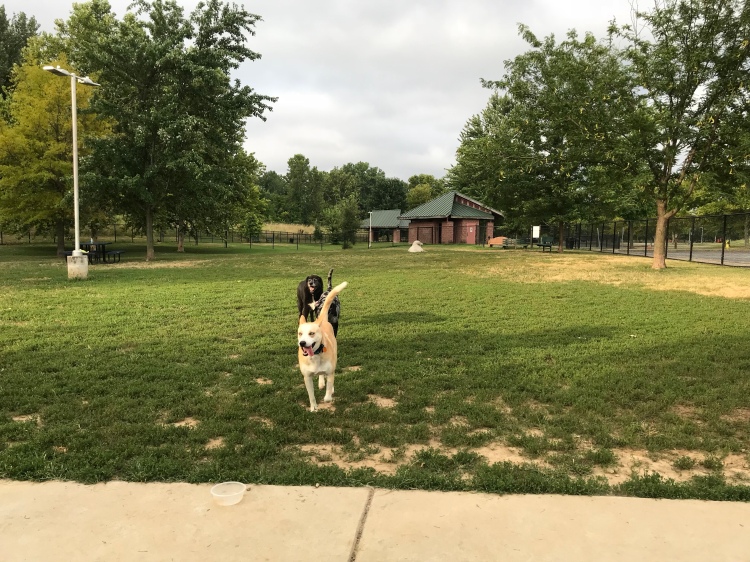 Sunday would be our marathon day of travel. Blue made sure we were up to get an early start. And of course, we started the day with a walk back to the dog park. This was the perfect recipe for a dog that snoozed the majority of the drive. In Kansas City we made a quick stop at a Camping World to replace the sewer hose we forgot. And we couldn’t pass through such a BBQ epicenter without sampling local favorites. We consulted Yelp and exited just across the Missouri River for SLAP’s BBQ. We were fortunate to find enough on-street parking to accommodate our trailer. The ordering line was out the door, but fellow patrons assured us that we would not regret the wait. I took Blue for a walk around the neighborhood while Ted placed our carry-out order. Just as we met up in the parking lot and began to walk back to the trailer, we ran into an owner of the joint who assured us that Blue was welcome on the open-air patio. We declined since we hadn’t purchased drinks, but he insisted we could enjoy a drink on him. We couldn’t refuse such excellent customer service so we dined at a delightfully shady picnic table. Ted had ordered quite the sampler of meats and sides. All was reasonably priced and delicious, but the jalapeno cheddar sausage, “burnt ends”, and warm potato salad really stood out. Ted declared it the best BBQ he had ever had. 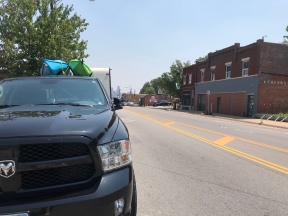 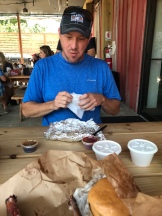 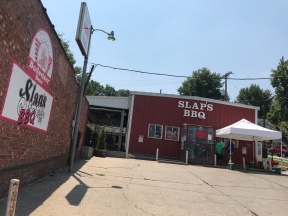 With full bellies, we pushed on into Kansas. The state is notorious for its bland landscape, so we were pleasantly surprised to find gently-rolling, lush-green bluffs. It would have been beautiful if there were just not so much of it. We also heavily relied on our iExit app in this stretch. Gas was not available at every exit. In fact, it is possible to travel quite a distance with no amenities. In one instance, I failed to notice how far off the exit our planned gas stop would be and had to make a ten mile detour into town. It was rather aggravating to lose so much time on such a long driving day. 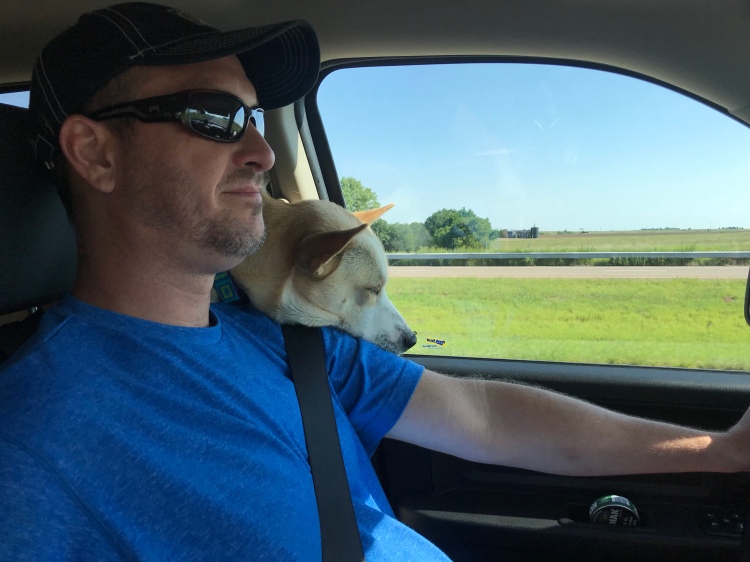 By dinnertime, we were all ready to be done with the drive. But campgrounds were scarcer than gas stations in West Kansas and I had booked at a KOA at the far end of the state earlier in the day (using the app). We had no choice but to push on through. We arrived in Goodland, Kansas just at 7:30pm MDT for a twelve hour driving day.

Fortunately, the KOA was again extremely convenient for an overnight stop. This time we scored a full-hookup pull-through. The Goodland KOA features 55 sites in an open field. It is adjacent to an old farmhouse that is charming if you are in a Wizard of Oz frame of mind, but terrifying if you lean towards Chainsaw Massacre. 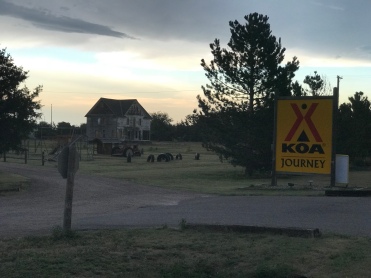 We were settled in and eating dinner within minutes. We each went on a quick walk with Blue, but the black storm clouds we had been watching form along the horizon finally crossed into Kansas and created quite the summer storm. Unfortunately, poor Blue did not get nearly the exercise she needed this day and she had slept for the bulk of the ride. She had no interest in sitting in the trailer quietly while we slept. She did not settle down until well after midnight. Meanwhile, I began to panic a bit about not being able to find camping in the entire state of Colorado. I scrounged a couple reservations for the first nights just about the time that Blue settled in. It was a short sleep though and she was back up well before 5am.

We couldn’t negotiate with Blue for any more sleep, so we might as well get up and go. We would be in Denver in no time! And where would our first stop be? This trip has turned into the parade of dog parks. We let Blue run out some pent up zoomies, did a quick Cabela’s shopping trip and finally headed to our campground. We arrived well before the 1pm check-in time, but lucked into a ready campsite. We were able to get set up, eat lunch, clean the trailer a bit and take a much-needed nap before exploring the campground a bit.

St. Vrain’s State Park is just 20 minutes north of Denver. It is located just a half mile from I-25 so the traffic noise was persistent. Eighty-seven sites are distributed around a series of ponds. We learned each lake is stocked with a different species of fish: catfish, bass, etc. We spotted a decent number of birds that were unfamiliar to our Ohio eyes. We especially enjoyed watching the Swainson’s hawks. The sites have large concrete pads and gravel patios with a picnic table. A curved aluminum lean-to provides shade for the sites. 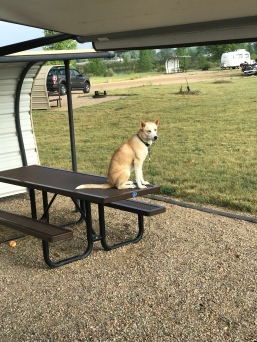 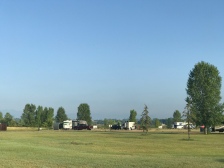 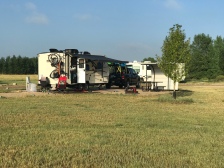 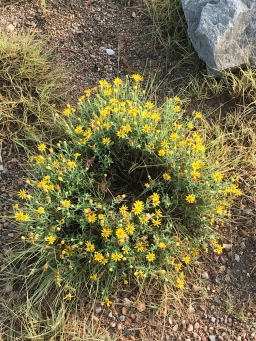 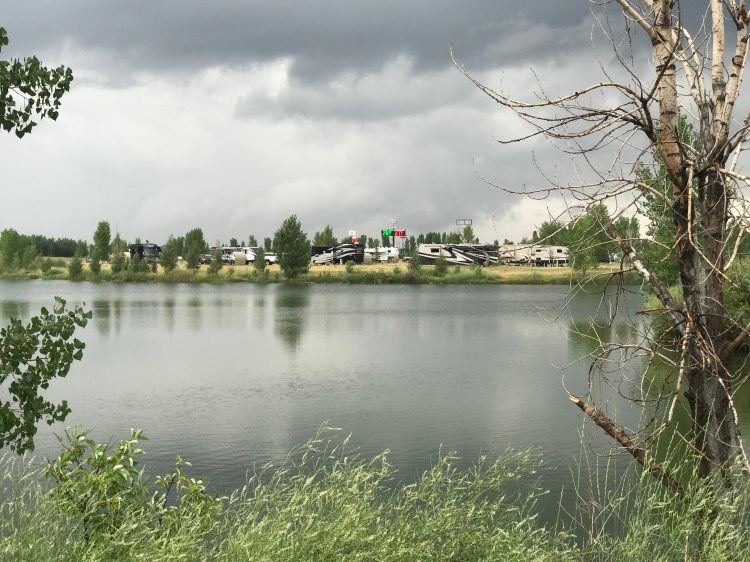 Again, our walk was cut short by an incoming downpour and this time we managed to get completely soaked. 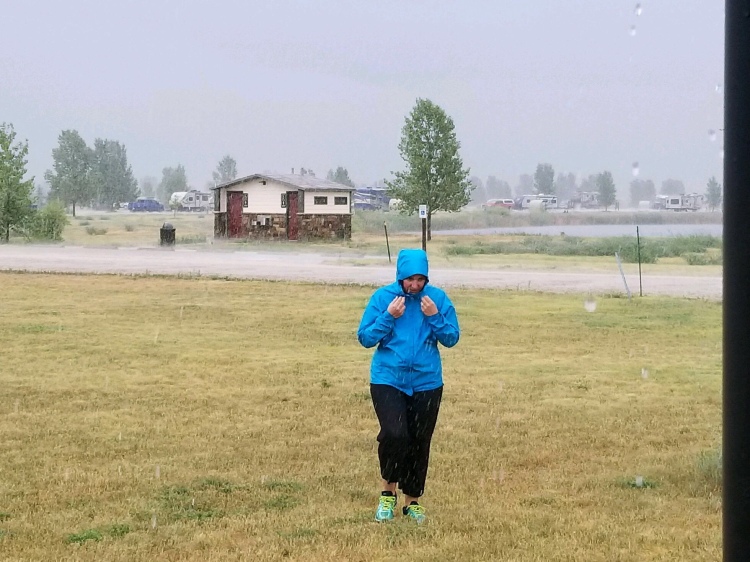 We dried off just in time to head into suburban Denver for dinner with two cousins. It was great seeing the Denver clan and the house had a lovely backyard in which Blue could continue to play. The neighbor also had a carved bear statue and Blue nobly defended us from it.

We made our way back to the campground in another rainstorm. I believe we have been present for nearly half of Denver’s rainfall. This time Blue had no problem heading into the trailer and promptly fell asleep. 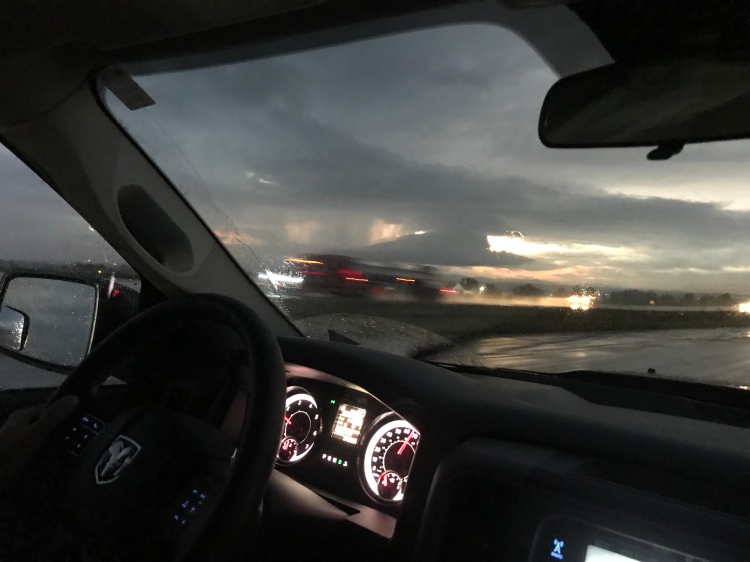 She made it to nearly 5am this morning. Which in all fairness, is 7am Eastern time, so we were awake not long after. I managed to get another hour of rest, but Ted got up and took Blue on a walk. When he got back, it was my turn to identify the source of some of the strange birdsong I had been hearing. The Western Meadowlark was the culprit and Blue was able to confirm. Ted made a hearty breakfast and then ran to Walmart while I gave the trailer a final cleaning. It will be a while before we have full hook-ups again.

We were on the road by mid-morning and finally got our first real glimpse of the mountains on the drive. The scenery on the way in was spectacular and it was hard to believe that a week ago, we had no idea what this Tuesday morning would be like. 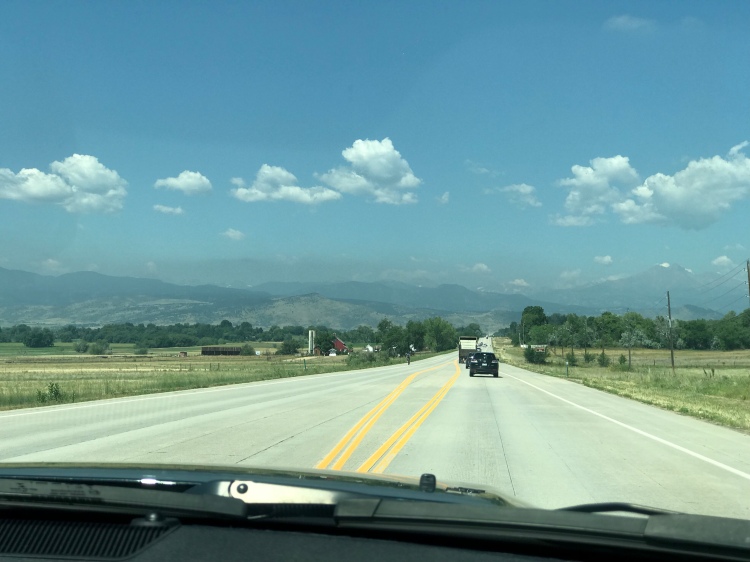 For the next three nights we will be at Bobcat Campground in Hermit Park. This is an operation of Laramie County and the scenery is amazing. Sites are arranged in two separate areas. Hermit Hollow is at slightly lower elevation. Generators are not permitted there, so I imagine it is geared more to tenters. The Bobcat Campground is situated at 8500ft of elevation. The sites are variable in their width and depth. A couple sites have to be more than a couple hundred feet long! Most have a very rustic setting with boulders and scrub pines providing natural landscape. We arrived before official check-in, but got all the paperwork done. We were thrilled to learn that the campfire ban officially expired at noon! We loaded up with firewood and drove the 2.5 miles up a windy, dirt road to the actual campground. We were still a couple minutes early, so we made a quick lunch and took in the cooler mountain air. We thought our site might be a bit small, but we managed to maneuver the trailer and truck into position. It has a wonderful tiered setup; the table is above the trailer and from the pad where the campfire ring is, we can see the mountains peaking over the trailer. 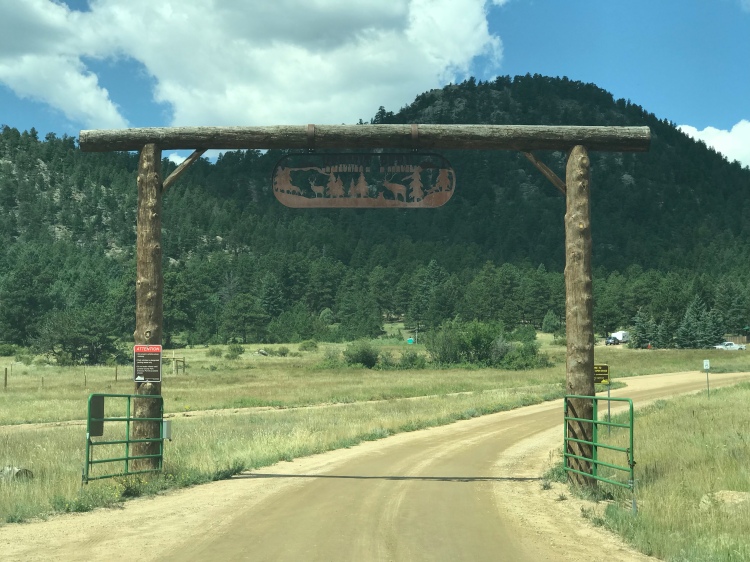 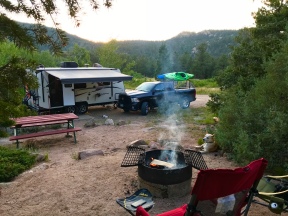 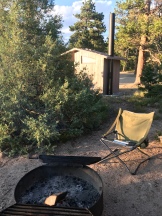 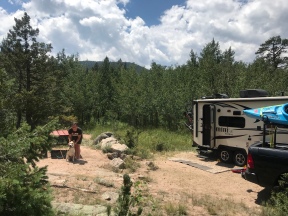 We intended to go on a short hike, but as soon as we laced up our boots, thunder boomed in the distance. Instead we hopped down to Estes Park and drove through the entrance of Rocky Mountain National Park just to get a park pass. Back at the campsite, a few showers passed over, but we were content to relax in the shade. It would be a perfect site, except for the biting flies. Ted and I are avoiding the worst of it with frequently applied Deet, but poor Blue has had much relief. We are now getting ready to cook some hot dogs over the fire and hoping the setting sun will bring a little relief from the flies.

I had been hearing Great Horned Owls all night every night in this campground and even got to see one swoop around at dusk. But I was thrilled when another resident let me know where the roost is. I never would imagine to look in the middle of a palm tree!
I am not normally one to chase birds. But when I happen to be in the same spot as a first ever ABA sighting, I feel like I should go pick it up. So my ABA life list now has a Bat Falcon! As with most things in birding, half the fun was the community of fellow birders. Thanks to all who helped me find this fella today and good luck to all those looking tomorrow!
Loading Comments...
%d bloggers like this: