Blue let us sleep until 6am today. Even so, we were slow to get moving. It was in the 40s and I discovered a plastic baggie overflowed from a drawer onto the heater, so we hesitated to run it for long. Ted took Blue for a quick walk and we got ready to go look for animals. A quick trip southwest was fruitless. A bit past the campground, I spotted a female moose, but Ted then realized he left his phone back at the camper. So we made detour to the campground. I needed to register for another night anyway, so we killed two birds.

Yesterday’s trip over Thunder Ridge Road didn’t give us a chance to do much sight-seeing, so we decided to make the climb again. This time, we pulled out at all the overlooks and took in the vast expanse of distant peaks and ridges. We took plenty of pictures and read up on all of the site markers. We made it as far as _______ before deciding to head back. 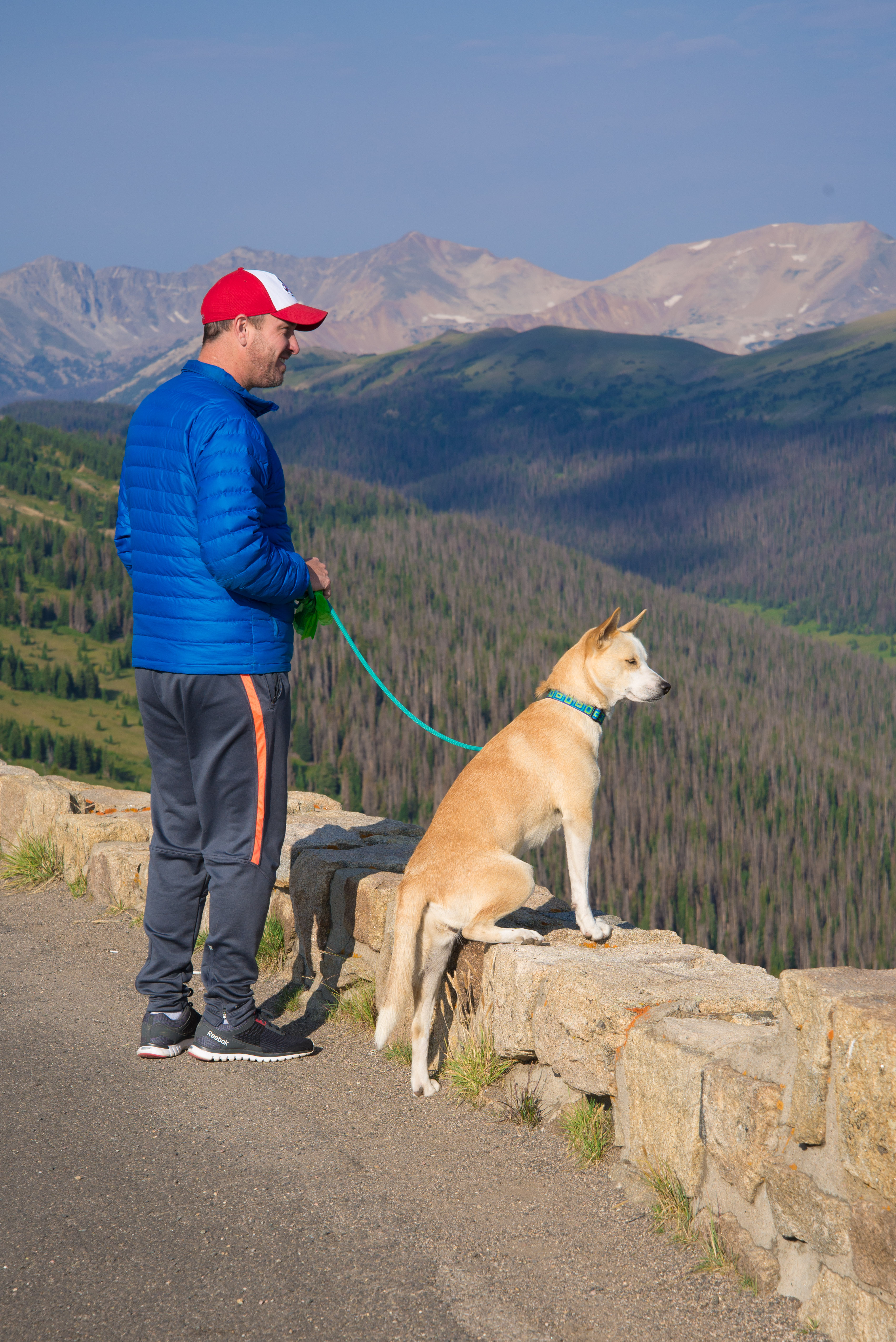 We needed to do a bit of souvenir shopping so we pulled into the Alpine Visitor Center. Sadly, Blue butted into our normal shopping, so we had to take shifts. I was just getting ready to check out when a piercing BRRRRT erupted all around. The fire alarm was set off and we were all evacuated. Our shopping trip was turning into an hour long affair, but this was actually a decent souvenir shop and probably worth sticking around for. Ten minutes later, we were let back in, I retrieved my purchases from a random table, and we were on our way!

Back at the trailer, we discovered we were the recipients of an official warning for having our outdoor rug on the grass. Oops!

We were feeling the effects of being at such high elevation. We ate lunch and then all of us fell into a catatonic state. When I tried to get Blue out of the truck, she just collapsed in exhaustion. I managed to coax her into the trailer so I could take a nap as well. She threw her normal fit, then fell sound asleep on the couch. Ted also took an hour nap while I dozed and read.

By 1:00, we knew we had to get up and get moving if we wanted to hike. We headed back out of the park to Lake Granby and the Arapaho National Forest. We needed some bottled water to last on the hike, but thinking there had to be one more stop ahead created a costly detour past our country road to the town of Granby.

Arapaho Bay on the far side of Lake Granby was a very picturesque inlet. We discovered a lovely forest service campground that we made note of for another time. This would be the perfect place to launch our kayaks from. Further on was the actual Lake Monarch trailhead.

This is a service fee area and there was a woman at a cabin requesting all hikers check in and asking if we had our registration tag posted in our car. Fortunately, we had purchased an Interagency Pass when we arrived at RMNP and this was sufficient.

As we were packing up for the hike, Blue was in her “stop” mode. A carload of hikers commented, “You sure wore her out!” We replied, “We haven’t hiked yet!”

The Lake Monarch trail circumnavigates the eponymous lake in addition to a bit of the surrounding land. We decided to strike out in a counter clockwise direction. Our hike was bookmarked with adventure. As soon as we started across the levy that created the lake, we heard a PING and Blue’s tags went flying as she launched herself down the ravine after a ground squirrel. We were stunned. This marked the third time we had lost our dog on this trip.

Ted dropped his pack and scrambled down the embankment after her. Fortunately, she was deeply engrossed in a squirrel hole and hadn’t traveled any further. In recreating the scene of the crime, we figured out that I must have clipped Blue’s leash into the ring that holds her tags instead of the D-ring. Obviously, this ring is not meant to withstand the force of an excited Blue dog.

The Lake Monarch trail follows the shore of a picturesque lake. The woods in this area are much more lush than others we have explored in the region. Lichens adorn the trees and mosses and ferns carpet the floor. It was a refreshing change. There were no sweeping views, but it was pretty nonetheless. Many other longer hikes depart from the far side of the lake, but we had a late start and needed to get back to the trail head. 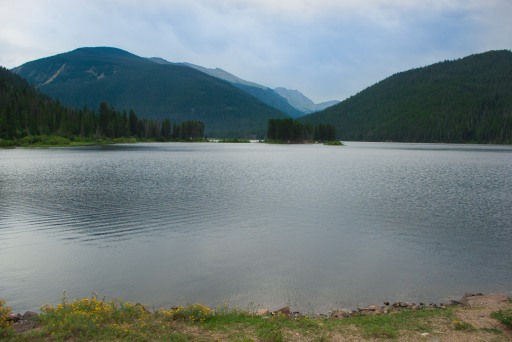 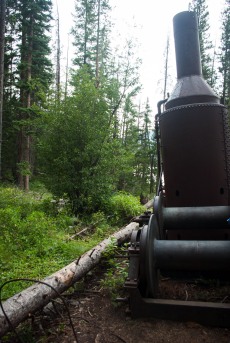 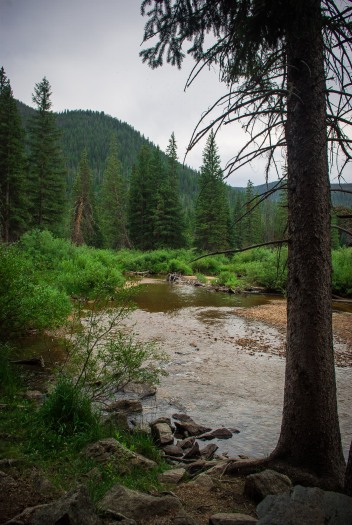 The trail crosses two stream that feed the lake,. These divulge into wide marshes that make perfect moose habitat. Ted and I kept our eyes open and Blue used her nose. We also were sure to make plenty of noise. That is why it was so surprising for Ted to come eye-to-eye with a cow and her calf on the last half mile of the trail. Ted swears she was no more than three feet off the trail and they were mutually startled. Blue lunged for the creature and she and her calf fortunately moved further into the thickets. Like I said, adventure bookends! 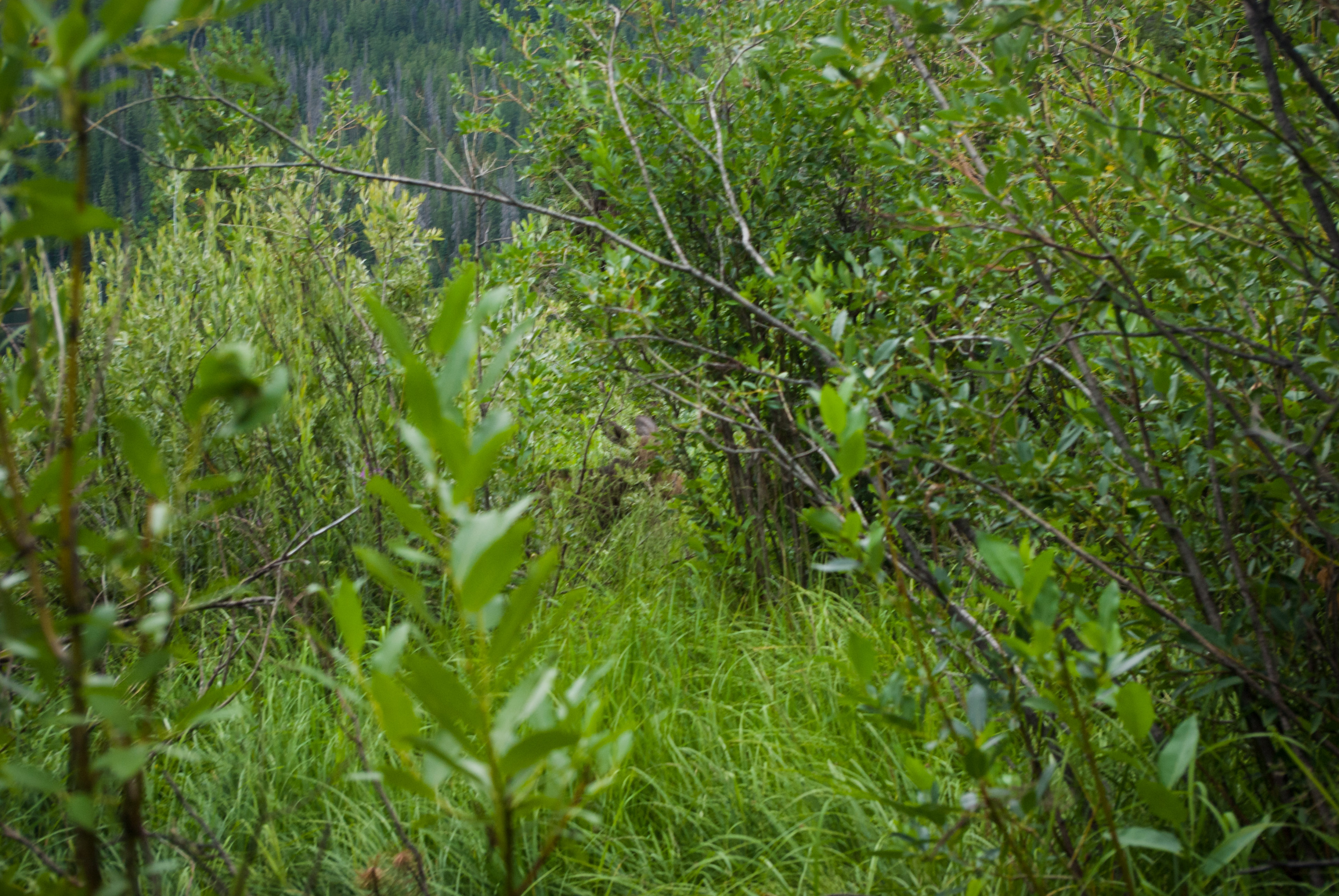 Just as we approached the trailhead, the sky darkened considerable. I visited the outhouse while Ted went ran ahead to the truck. The wind picked up, signaling incoming weather. Large droplets began to ting as I made a run for it. Ted backed up the truck and I ducked inside just as the rain started in earnest.

On the way back to the campground, we drove through Grand Lake and agreed that if we were to ever return to the area, this was much preferable to Estes Park.

Back at the campsite we enjoyed an uneventful evening. We made a fire, roasted corn and hot dogs and swapped stories of the day’s adventures with our campsite neighbors. Today seemed to be a good day for all.