Last night wrapped up with Ted befriending our neighbor Emmanuel, a single dad out with his girls for the first time. We invited him to share our campfire after their bedtime and therefore stayed up a little later than intended. Blue didn’t seem to care and got us up at 5am again. Ted put her back outside, but I was awake enough to read and doze rather than fall deep asleep.

Since we didn’t have reservations for the night, we were eager to get backed up and claim our first-come-first-served campsite. We finally packed everything up as fog oozed over the mountain ridge, layering us and our things with a glistening of water. We said goodbye to Hermit Park around 8:30am. We were sad to leave, but ready to explore another area.

The only way to the other side of the park is via Thunder Ridge Road. This 40 mile stretch of paved highway doubles back on itself again and again, climbing to over 12,000 feet. Few guardrails separate the road from 90 degree drop offs. It requires a confident driver, especially if you are towing 5000 pounds of trailer behind you. Ted wove uphill expertly. He paced with all of the SUVs, vans, and sedans. Downhill was another story. It was our first extended downhill grade and it took about half of the trip of looking in the manual to figure out how to use the transmission to slow us down. We think Blue might have been greatly distressed by the pressure in her ears and I worked on giving her chewy treats and trying to trigger yawns in her by yawning myself.

Our nerves were worn by the time we reached 9000 feet where our campground would be. We never stopped at the entrance station, but immediately began patrolling for an empty spot. The Timber Creek campground is certainly designed for tents. Each site features a tent pad, picnic table and fire ring. Most sites are relatively shallow. Signs at the entrance strictly forbid vehicles over 30 feet. I would say there are maybe three or four trailers at 25+ feet and they are very fortunate to have arrived as appropriate sites were available. We could have squeezed into couple different sites, but found a pair that looked like they were putting their finishing touches on departure. Ted waited and “held” the site while I walked back to the entrance station to officially register. Our neighbors at this site, Kevin and Sharla, were extremely friendly. Having recently lost a dog, they were eager to play with Blue. We ate lunch and dallied a bit around the trailer. But we soon decided to try to get in a hike.

We headed southwest toward Grand Lake. Again, we needed to get out of the park to find a dog friendly hike. A traffic jammed signaled our first moose sighting of the trip – a nice bull, calf and cow, about a hundred yard off the road. A few missed turns, and we arrived at our planned trailhead only to find it severely damaged by fire. A sign notified us that the trails were still accessible at the golf course. We skeptically continued on and eventually found the make-shift entrance to the Colorado River Trail.

Sadly, this entire area was recently managed by the forest service to mitigate the pine beetle damage and protect the community from forest fires. This meant that nearly all the trees were down. It was a hike through a ghost forest, eerie and ugly and cool at the same time. Despite the destruction, the trail was very well maintained and marked. Several logging roads intersected the trails and could be a bit confusing, but signs always confirmed we were on the right route. 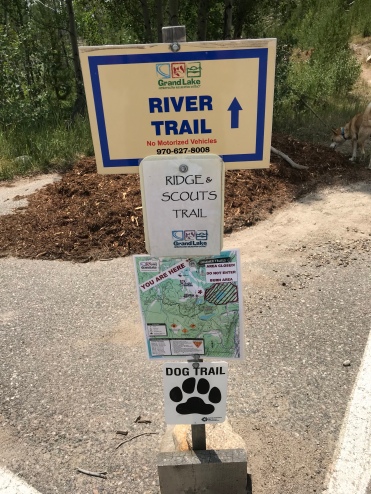 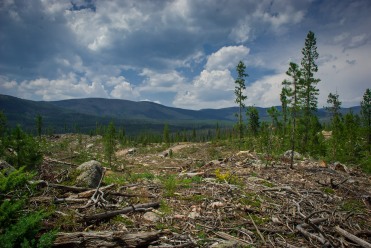 The destination of the Colorado River Trail is rather obvious. But we are familiar with the river as the massive, muddy architect of the Grand Canyon. We were shocked to find a shimmering mountain brook, easily waded across if we were so inclined. The cold waters refreshed are barking dogs, both literally and figuratively. 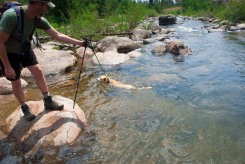 When we followed the signs back, we seemed to have found a shortcut to the parking area, barely beating the thick black clouds as they rolled in. 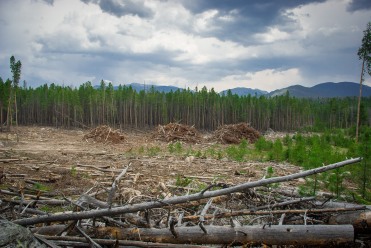 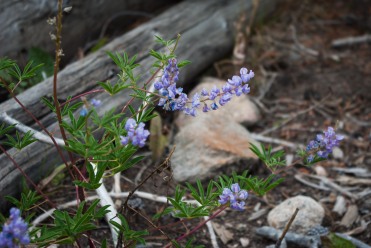 Ted hopped into town to visit a car wash and remove the layer of back road dust, not out of vanity, but because the dust was infecting all of our clothes as we walked past. We have been out for nearly a week without laundry, so clean clothes are getting precious.

Back at the campground, we treated ourselves to a slightly more labor-intensive meal and cooked up some spaghetti and meatballs. The most complicated part was making the pasta. At 9000 feet, the water doesn’t boil hot enough to really cook the noodles. Gales along the valley forced us to eat inside and made Ted’s campfire a little precarious. It is concerning to see flames dart at a complete right angle.

Blue attended to the smells on the air and announced our first evening visitor by becoming increasingly agitated. She rarely whimpers, so we guessed she was picking up the presence of an elk or bear. Soon four large calves made their way to our campsite. Blue shivered with adrenaline, but didn’t make much move to get them. We sat with her and tried to calm her as we watched the large creatures lick the grates of the fire pits around us. We began to think it would be wise to put Blue in the trailer when one huge cow headed right toward us. Ted yelled, “Go! Get her in the trailer, as he futilely attempted to lift ME by the armpits and shove me in.” I finally made him understand I wasn’t capable of lifting her if he was trying to lift me. 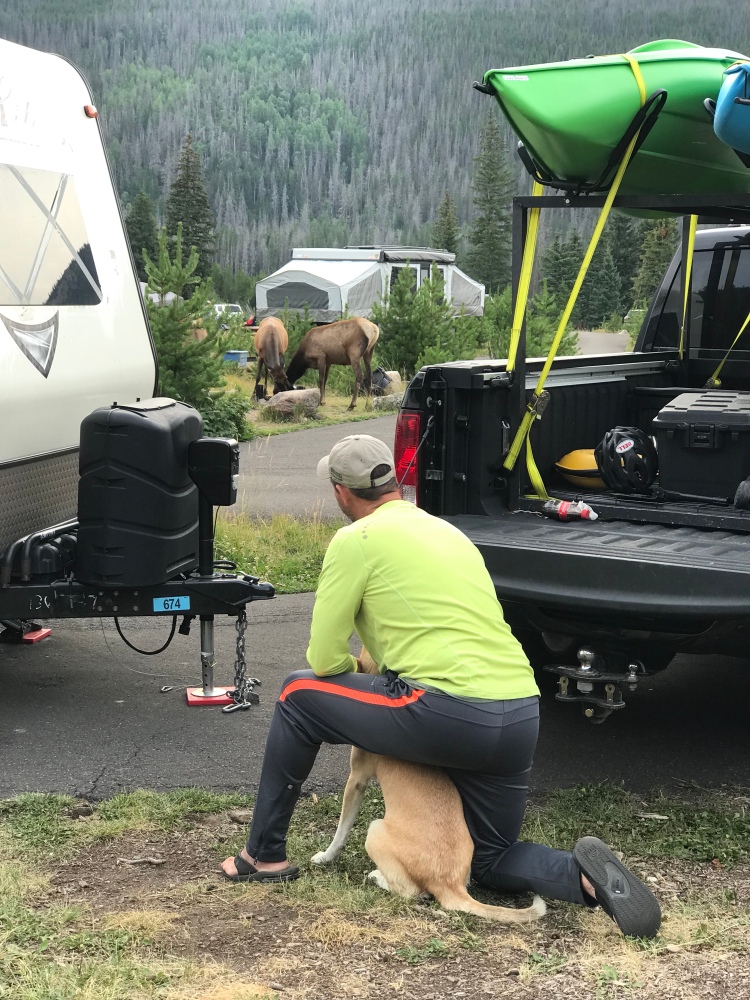 We all finally climbed into the safety of the trailer and watched with horror as the cow investigated our site and our hastily abandoned laptop, drinks, books, etc. She even attempted to lick the grate of our burning fire! She miraculously wove among our camp chairs and tables without disturbing anything. We then tried to calm Blue as she watched the remaining cows from the window.

Finally the elk decided to move on and we relocated outside. An obnoxious mule deer insisted on grazing within yards of our site, but we managed to keep Blue’s excitement to a vigorous vibration instead of full-on panic. My laptop battery was low enough to necessitate pulling out the generator. After about 45 minutes, the computer battery was 55% charged so I gave up.

At 9 we walked down to the beautiful amphitheater for the nature program. We were expecting a talk on the Colorado River, but the presentation was on the influence of the media on RMNP. Blue was having none of this. She wandered among all of the surrounding campers, beggine for attention. When that wasn’tsatisfacory, she attempted her best impersonation of a bear scakping, attacking me from behind with teeth and claws. It was all very playful, but super distracting so we left.

We were all ready for bed, so we were dismayed to find an elk cow grazing raight in front of the camper door! We quickly put Blue in the truck and I worked to shoo her away. I think we startled her dinner and she walked away disgruntled.

All this excitement meant it took a bit for everyone to decompress an calm down, but I am optimistic we will all sleep well.